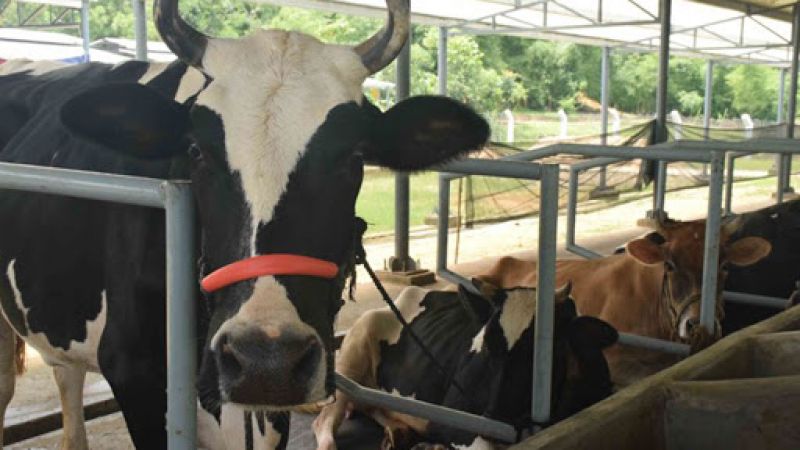 A quiet revolution has taken place in the area of cattle rearing. That dairy farms came up in an increasing number in the country's northern belt is widely known. What is less known is the commercial rearing of bulls by not only traditional farmers but also by educated youths. They may not have developed ranches like the cowboys of the wild, wild West in the United States of America, but are smart enough to know their trade. Their cattle farms may be puny compared with the hundreds of acres of sprawling ranches in Texas but in a land-scarce country like Bangladesh, it could hardly be otherwise. The young farm owners may not match the gun-slinging cowboys with top hats of enormous rims in appearance but in terms of entrepreneurship excel in smartness.

What is most remarkable is that they have inspired more of their kinds to take to cattle farming. Today, cattle farms have been developed and managed even in the vicinity of the capital city. The result is spectacular. Cattle rearing and fattening have worked wonder not only for organisers but also for the country. It can be considered an apt response to the ban neighbouring India slapped on export of cattle to this country. Clearly, the ban has proved to be a blessing in disguise.

For some years now, the country does not have to depend on import of cattle for sacrifice during the Eid-ul-Azha. Locally raised animals, considered better in terms of flesh, are enough to meet the demand of this holy occasion. Organisers of cattle farms made the miracle possible within a short time, say five to six years at best. It was in 2012 that the focus was directed to raising indigenous cattle. Since then the numbers of cattle and goat populations have been increasing.

By the year 2017, the country produced almost as many sacrificial animals as were required for sacrifice during the Eid. Last year, the country had at its disposal 11.6 million animals for sacrifice. In 2017, a total of 11.5 million animals including goats and sheep were sacrificed and last year the number of the available animals was enough to meet the demand for sacrifice. This prompted the Bangladesh Meat Merchants Association (BMMA) to chalk out some programmes aimed at restricting the entry of Indian cattle into the local market.

This year, it should not be any different so far as the availability of locally raised bulls and other animals are concerned. True, some of the farms raise foreign species like Holstein-Friesian cattle of enormous sizes mostly because one of those fetches millions of taka and the profit on those is handsome. Dairy and cattle farm developers have acquired the knowledge of special care the exotic kinds need for their survival and growth. Farmers have to be familiar with the feeding practices. One such animal consumes besides fodder and animal feed, fruits like grapes, banana, apple considered a luxury for farmers and many people in this country. But when a bull weighs 15 to 20 tonnes, its price more than compensate for the effort. For moneyed people it turns out to be a prestige issue to sacrifice the largest and handsomest of the bull available.

However, not all give in to such ostentations and they just want to accomplish the religious duty as modestly as possible. For them, the best bargain is an animal raised under watchful eyes of cattle farm developers in several areas around the capital. Taken well care of, the animals are not fattened artificially with hormone injection. Veterinary doctors regularly check their health and certify their well-being. Located in close proximity at Mohammadpur or in Manikganj, Munshiganj and Narsigndi, these farms can be visited by intending customers personally. No rush, no noise and unpleasant comments and they can make their choice in a relaxed mood.

This is how the country's livestock resources have transformed for the better. Animal husbandry has assumed a more responsible role in order to meet the country's need for meat. Farmers have proved the doubters, who thought this small land is unfit for raising enough cattle equal to its demand, totally wrong. Farmers on all fronts -whether it is agriculture  involving grain cultivation, vegetables and fruits or even flowers or pisciculture - have proved their worth.

In dairy development too they did not lag behind much. It showed great promise but the latest controversy over milk has dealt a serious blow to the sector's future development. Rise in the cattle population is interrelated with milch cows and if milk and dairy product become suspect, it has to be ascertained soon where from milk gets antibiotics, led and detergents in it. If it is in the feed, the fodder and other contents should be made free of such materials. If the source is elsewhere, that should as well be rectified. If the pasteurisation process is faulty and at some point of it milk gets contaminated, this should be identified and remedied.

After all, the country's dairy and cattle farm are in the process of flourishing. This should not be hampered. Instead of resorting to a blame game, all stake-holders should rigidly follow rules and regulations in order to make milk and dairy products wholesome.